Sixteen-year-old Starr Carter navigates between two very different worlds, one the poor, mostly black neighborhood where she grew up, and the other the fancy private school where she has learned to step carefully and watch her words. Starr’s precarious hold on these two worlds is shattered when she and her childhood friend, Khalil, are involved in a traffic stop that goes terribly wrong. Khalil, who was unarmed at the time, is shot and killed by a police officer, and Starr is the sole witness to the crime. This tragic event ignites already smoldering racial tensions. Controversy blazes as headlines claim that Khalil was a drug dealer, a gangbanger, someone who had it coming. Only Starr knows what really happened, but speaking up may put her and her family in grave danger. In the maelstrom that follows Khalil’s death, Starr is forced to confront realities about herself and her community, asking herself if she has the courage to speak up for what is right and true, no matter the cost. Angie Thomas’ debut novel exquisitely captures the complexities of race, friendship, and family, promoting understanding and fueling discussion about police brutality, racism, and the Black Lives Matter movement. 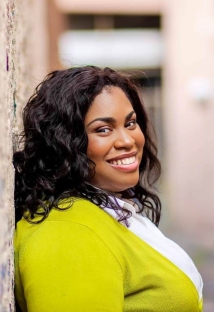 The Hate U Give has been at the top of my to-listen list for ages now. The book itself is so timely and important, and it’s been hard to miss, since it’s gotten nothing but love wherever it goes. Even the cover is a work of art! Aside from the critical acclaim and outstanding artwork, this audiobook caught my attention because it’s narrated by the unbelievably talented Bahni Turpin, who has many accolades under her belt, including three Audie Awards, multiple Earphones Awards, and the 2011 Odyssey Award for The True Meaning of Smekday. Turpin’s signature warmth and vivacity enliven all of the books that she narrates, and I hoped that this audiobook would be no different.

I’m delighted to say that The Hate U Give is a truly excellent audiobook, one that compels you to listen and listen and listen some more. It’s the kind of audio that makes you want to avoid people at all costs, because you know that any interruption will ignite serious crankiness. Bahni Turpin shines in her narration of Starr, bringing out her humor, sassiness, fear, and grief. Starr’s utter heartbreak at Khalil’s death is raw and real, uncomfortable to hear, and justifiably so. Turpin’s portrayal of the many secondary characters is masterful as well, capturing Starr’s family and friends in all of their quirky, smart, intense, and loving glory. Starr’s voice grows stronger as the story progresses, stripping away her initial hesitation and self-doubt, sweeping the listener along as she gains the courage to speak out for the people that she holds so dear. An inspiring, heart-wrenching, and thoroughly satisfying listen.

One Response to “Audio Review: The Hate U Give by Angie Thomas”