Do you like espionage, mystery, and that Harry Potter trope of a non-traditional boarding school? Then Colleen Seisser has an audio for you! 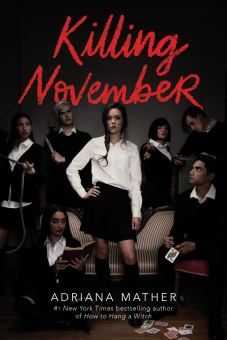 I admit it, I am a sucker for any “this school is not what it seems” novel, especially one where students live on campus, so you better believe I thoroughly enjoyed Killing November. Written by Adriana Mather and narrated by Cassandra Morris, this novel hit all my must-haves for a good secret school story:

With a title like Killing November, clearly there is someone trying to kill the main character November in this story. November grew up in a small northeastern town and had a pretty simple life. Until the day when, out of nowhere, she was sent away to Academy Absconditi because her father deemed life too dangerous at home. November has no idea where this school is (she mysteriously woke up there), and when she starts taking classes like knife-throwing and poisons, she starts putting two and two together that this school is home to some of the world’s most dangerous spies and assassins. As students start dying, however, November realizes that she has a target on her back, and she must figure out why she is at this school by learning the truth about her family and their secrets.

Morris gives this production a clear and crisp narration. She handles the character of November with ease, giving her life and creating a relatable voicing to bring you along with her in the story. She also handles supporting characters really well by giving them a voice of their own. There can be inconsistencies at times with accents, but November is at a school for super sleuths, and students and faculty are changing accents throughout the story to hide where they came from.

Despite questionable accents, Cassandra Morris follows the text cues to a T. One good example of Morris following the text is when the students are tested with the two truths and a lie game. One student answers unconfidently and the professor points out that she answered and it sounded like a question. Another student emphasized their lie by saying it louder. Both this text cues were employed in the narration. This attention to detail really elevates this production and allows the listener to delve deeper into the story.

If you’re like me and love espionage, mystery, and that Harry Potter trope of a non-traditional boarding school, be sure to pick up Killing November and give it a listen!

Colleen Seisser is the Collection Services Manager at the Aurora Public Library in Aurora, IL. She is a current Board Member at Large on the YALSA Board of Directors and she also reviews audiobooks for Booklist Magazine. Colleen attributes ramping up her obsession with audiobooks from serving in various roles on YALSA’s Amazing Audiobooks for Young Adults Committee from 2012-15. She has been listening non-stop since then! When not listening, Colleen is either crafting, gardening, or jammin’ on her planner!  Find her on Twitter @colleenTS81.