In a medium that’s ripe for diversity, Van Hoang’s Girl Giant and the Monkey King is a welcome middle-grade fantasy inspired by Vietnamese culture and mythology that tells the story of how far one young woman will go just to fit in. 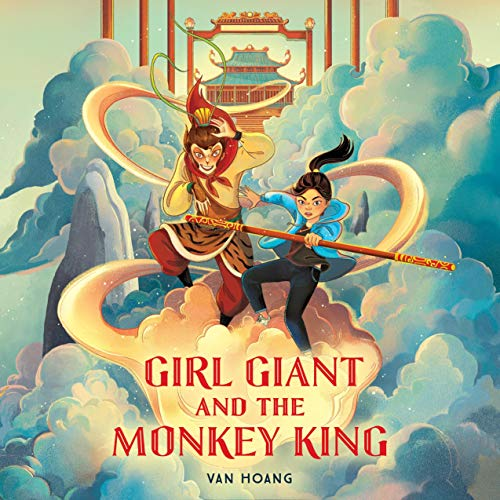 “For anyone who’s ever been told they’re too quiet, too loud, too dark, too plate, too much, or too little; this book is for us.”

Eleven-year-old Thom Ngho just wants to fit in. Except she’s at a new school, one of the few Asian students, and she’s strong. Like ridiculously strong. So strong that she runs the risk of killing her teammates with a soccer ball if she’s not careful. There’s obviously no hope for Thom, at least, not until hope presents itself in the form of the Monkey King.

Since Thom (accidentally) freed him from his 500-year-long imprisonment, the Monkey King promises to help remove Thom’s unnatural strength, but only if Thom helps him retrieve his magical cudgel. Nothing is as simple where the trickster deity is concerned, however, and Thom finds herself in conflict with dragons, giants, and even the armies of Heaven before Thom realizes that helping the Monkey King might have been a colossal mistake.

Overflowing with action and fantasy, Van Hoang’s debut novel is a story of self-acceptance as much as it is anything else. Inspired and borrowing elements from The Journey to the West, Hoang’s Girl Giant and the Monkey depicts the trials and challenges of a middle-schooler with a flavor that fans of franchises like Percy Jackson and Harry Potter are sure to find delightfully palatable.

Girl Giant and the Monkey King is brought to life marvelously by Kim Mai Guest, whose performative talent is absolutely perfect for Van Hoang’s debut novel. This was my first exposure to Guest, but it will certainly not be my last. Much of my appreciation for Guest’s narration stems from her ability to delve into characters with skill and respect to each, breathing life distinctive from protagonist to seemingly the most insignificant character. Guest is a single narrator, but character shifts were easy to differentiate. Thom, the protagonist, is delivered with emotion and angst that’s all too familiar if you regularly interact with tweens. Subject to Guest’s performative range, the Monkey King’s boastful arrogance is demarcated by a genuine congeniality, which frequently evokes earnest sympathy from both listener as well as the characters. Most remarkable among Guest’s character shifts is that of Thom’s mother whose Vietnamese accent reminded me of a beloved friend, and the effect was a deeper immersion in the story by way of an acoustic familiarity.

It’s no secret that I typically prefer multiple narrators –– if not a full cast –– to single narrators, so when I stumble across a narrator can make me forget I’m listening to a single person, I cherish the experience. Narrators in this vein are transformative, and, as I suggested in a previous review, I often imagine myself sitting on the edge of my figurative seat like a child staring enrapt at a favorite teacher or librarian. More than once, with Girl Giant and the Monkey King specifically, I found myself reluctant to exit the car following my commute until a chapter had concluded.

Andy Myers is an aspiring Librarian toiling his way through the MLIS program at Wayne State University. Andy embraced audiobooks to make lengthy commutes more manageable, but has since fallen in love with this wonderful avenue to enjoying literature. An occasional thespian, Andy understands the power of a great performance and believes that an outstanding narrator can enhance just about any book. @AndyBeau